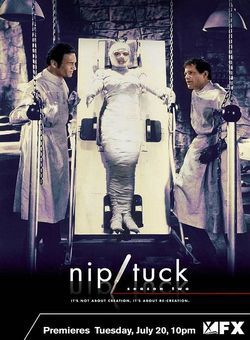 整容室第四季剧情介绍： This drama is set in a south Florida plastic surgery center, McNamara-Troy, centering around the two doctors who own it. Sean McNamara (Dylan Walsh) is having problems at home, trying to keep his family together, trying to patch up the rocky road him and his wife Julia (Joely Richardson) are experiencing. On the other hand, sex-craved Christian Troy (Julian McMahon) uses his charm to bring in potential female candidates and conducts shady business deals, often for the love of money. While Sean takes his job seriously, he often has to fix Christian's mistakes. During the first season, Sean and Christian got mixed up with Escobar Gallardo, a Colombian drug lord who forced the two to do free surgery whenever he wanted them to. Sean's marriage with Julia began to wear thin, and Sean had an affair with a patient named Megan O'Hara. Julia went back to school, but it was interrupted by a miscarriage of a child Sean and Julia were trying to have. Christian learned he is the father of a baby with a woman named Gina, who he met at Sexaholics Anonymous. When the baby was born, we learn that the baby is African-American, and therefore not his. Julia questions Matt's paternity.